There are a number of reasons air traffic control may place you into a holding pattern. Maybe unforecast weather has moved in and our destination airport is now closed to arrivals. Maybe a runway at your destination has been closed. Maybe another pilot has declared an emergency along your route. It could be some kind of equipment outage.

In addition to these reasons, it is common for holding patterns to be included in instrument approach procedures to allow pilots to align with the final approach course or lose altitude, if necessary. As we saw earlier, holding patterns may even be used in a departure procedure.

Whatever the reason, holds are always assigned and flown in about the same way. When assigned a holding pattern, the pilot is expected to stay within a designated area. We need to enter and fly this holding pattern so as to stay inside this area.

A holding clearance will usually begin with the air traffic control broadcast, "Cessna seven zero eight golf lima, holding, advise ready to copy." When you're ready, the controller will then give your holding clearance.

This clearance will contain the following items in order: clearance limit, direction of hold, the radial, course, bearing, or route on which to hold, leg length, turn direction, and expect further clearance time.

One thing that can be very confusing to instrument students is how to visualize the hold direction. When the controller told us to hold southwest, it means the holding area is located southwest of the fix. It's easy to make the mistake of thinking you are suppose to hold facing southwest, but this is wrong. You have to visualize the hold as if you are looking on a map, and place the holding pattern southwest of the fix, in this case. 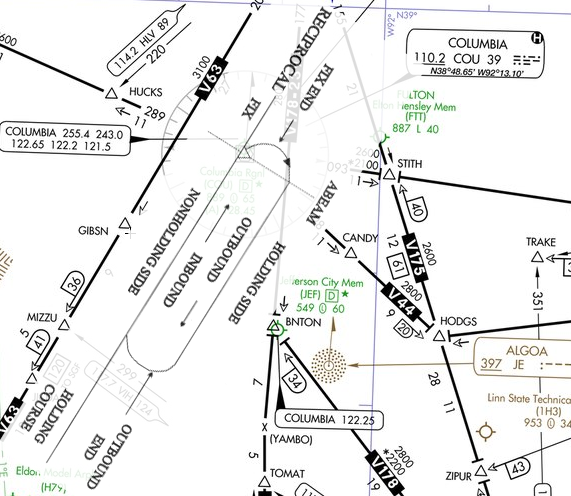