The departure procedure tells us we can expect 5000 feet 10 minutes after departure, since that is our filed altitude. It also contains the departure frequency. So, it was not necessary for the controller to restate these items. This is important because if you routinely receive your clearance from a facility that restates certain items, you may be caught off guard when you travel away from your home area. Make sure you are familiar with all information contained on your assigned departure procedure chart.

It is also possible for air traffic control to assign, but modify, a departure procedure. For example, “Cessna seven zero eight golf lima, cleared to Jeff City Airport via the Lakes Eight Departure, Columbia transition. Maintain 3000. Departure frequency 119.15, squawk 4207.” Whatever the controller states in the clearance overrides the departure procedure. However, if something doesn’t seem right to you, ask the controller for clarification.

Many departure procedures, such as the Teterboro Nine Departure will state initial headings to be flown. Let’s say you were cleared via the Teterboro Nine, Broadway, then as filed, and told to expect runway 24 for departure. You would look at the route description for takeoff from runway 24. It instructs you to climb on a 240 heading after takeoff until you reach 1,500 feet. Then, you should level off at 1500 and turn right to a 280 heading. Stay at that heading and altitude until you cross either the TEB 4.5 DME or the COL 11 degree radial, then climb and maintain 2000 feet. From there you will receive instructions to join your route. 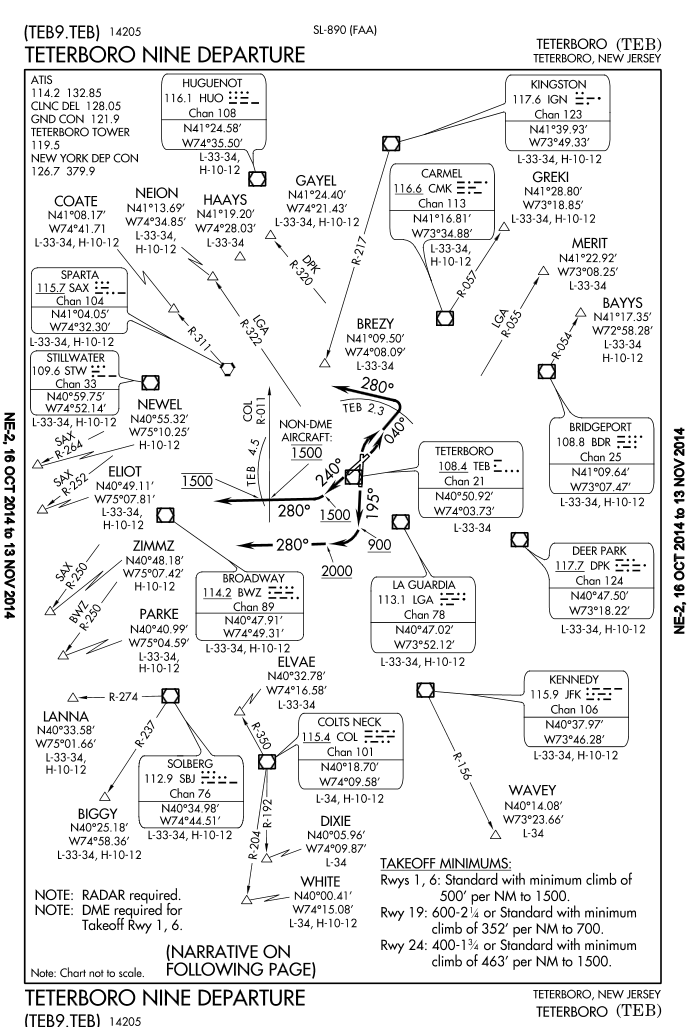 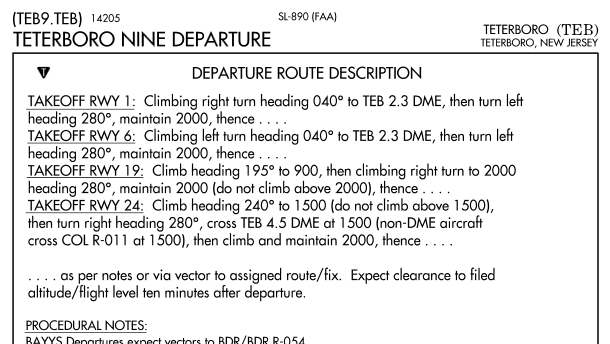 That whole thing is now part of your IFR clearance. So, you need to be able to make notes and setup your cockpit as necessary to comply with these instructions after you takeoff.

If you stated your aircraft is equipped with acceptable RNAV equipment when you filed your IFR flight plan, ATC might assign you an RNAV departure procedure. From the pilot’s perspective, an RNAV departure is just like any other. You are simply flying by reference to waypoints instead of traditional navaids and fixes. Out of Teterboro, a properly equipped airplane may be assigned the Ruudy Five Departure. Notice that the Ruudy Five is basically the same thing as the Teterboro Nine off runway 24. The RNAV version is quite a bit simpler to remember and comply with, from the pilot’s perspective, however. 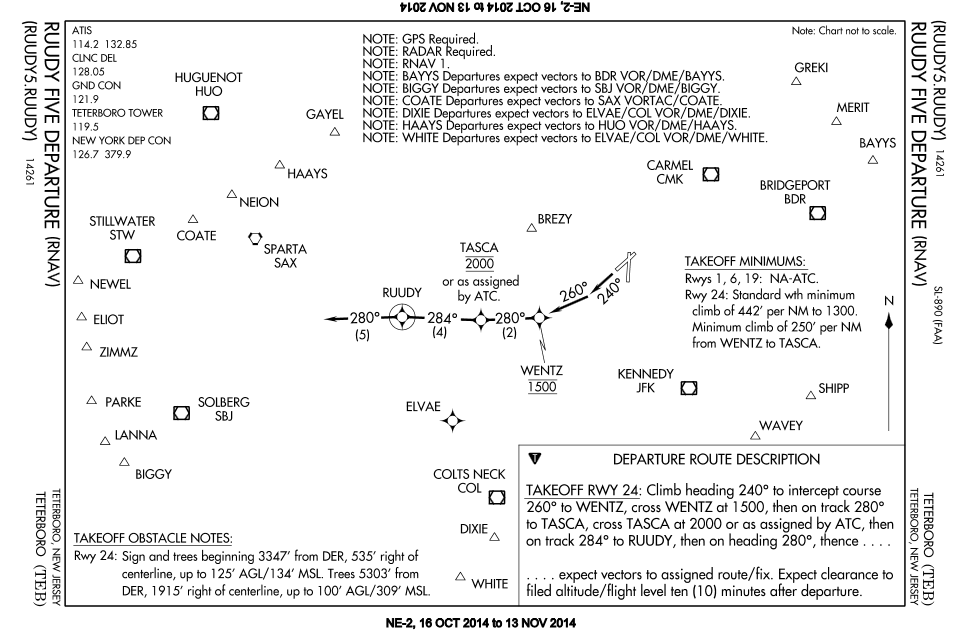 Finally, air traffic control may assign you an obstacle departure procedure, or ODP. An obstacle departure procedure is a departure procedure designed specifically for obstacle avoidance. The word “OBSTACLE” is included in the procedure’s title. For example, look at the Sardd Three Departure out of Aspen, Colorado. Off runway 33, it instructs us to climb on a 343 heading to 9100 feet. Then, turn left to 273 degrees and climb to 16,000. On that 273 heading, we are to join the I-PKN localizer back course and track it outbound to LINDZ intersection. When we cross LINDZ, if we are at or above 16,000 feet, we are to then proceed on course. If we haven’t yet reached 16,000 feet, we are to enter the depicted holding pattern over LINDZ and continue climbing in the hold while we climb. 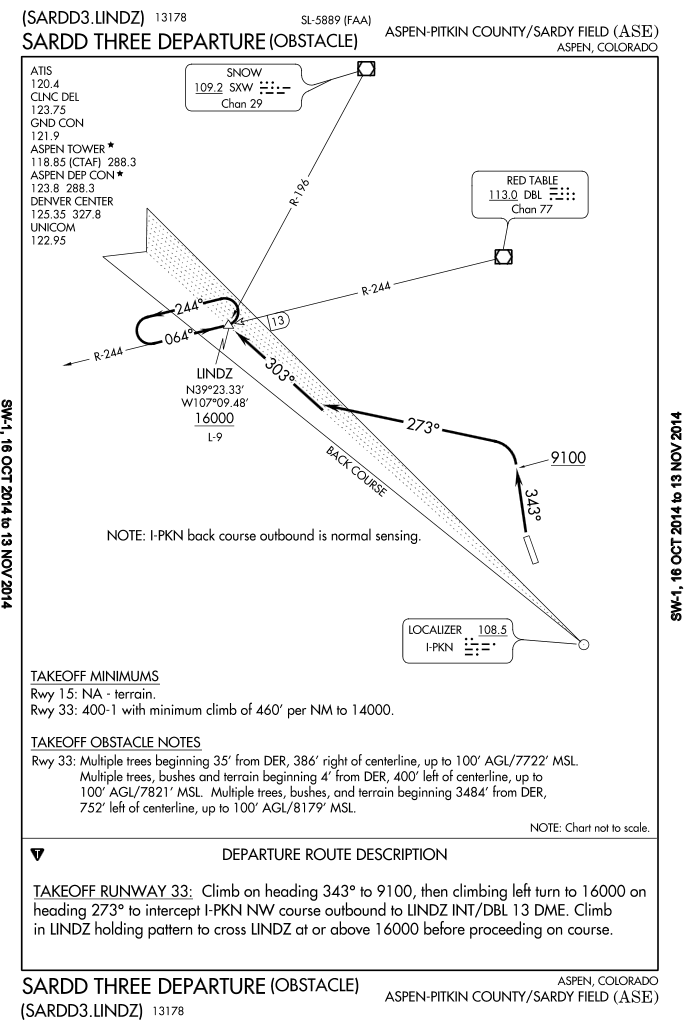 You can convert climb gradient, in feet per nautical mile, to climb rate, in feet per minute, using the rate of climb table. See legend 16, which is available during your knowledge test.

Alternatively, you may convert gradient to rate or climb using the formula: Groundspeed x Feet per NM / 60 = Feet per minute