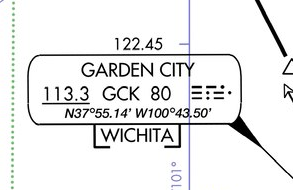 Flight watch and emergency frequencies, 122.2 and 121.5 MHz, are not listed on enroute charts.

When weather information is broadcast over a navaid, a white letter indicating the type of weather broadcast will be shown inside a black circle in the upper right or left corner of the navaid information box. An "A" means ASOS or AWOS is broadcast. For a HIWAS broadcast, "H" is used. And, "T" is used for TWEB. 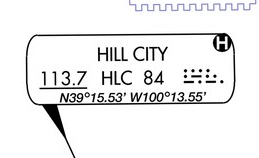 The MEA is the minimum altitude at which obstruction clearance and navigational signal coverage is assured. Communications coverage, however, is not guaranteed. The MEA typically provides 1,000 feet of clearance along the route, or 2,000 feet in designated mountainous areas.

Some MEAs are authorized to have breaks in signal coverage. Where this occurs, the chart will state "MEA GAP" parallel to the affected airway.

MEAs are normally bi-directional. If an MEA is authorized only for one direction, arrows are used to indicate the direction to which the MEA applies.

The MOCA guarantees obstruction clearance and navigational signal coverage when within 22 nm of the closest navaid defining the route. Where a MOCA exists, it is shown below the MEA with an asterisk, "*1900", for example. 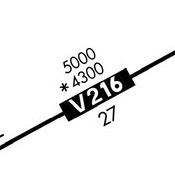 An MRA is the lowest altitude at which an intersection can be identified using a radial from an off course navaid. It is identified an R inside a flag and the MRA altitude, "MRA 5500", for example.

If you are identifying the intersection by some other means, such as DME or GPS, the MRA does not apply to you. 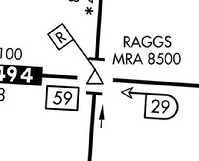 Normally, when a change of MEA to a higher MEA is required, the climb may be initiated at the point where the MEA change occurs, and obstacle clearance is still assured. When terrain or obstructions dictate the necessity, a minimum crossing altitude will be declared. If an MCA exists, the pilot must initiate the climb so as to cross the point at or above the MCA. 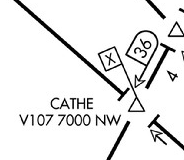 An MAA indicates the highest altitude at which adequate navigational signal can be assured. These maximum altitudes are depicted by the letters MAA followed by the altitude. Above this altitude, it is likely that another navaid on the same frequency will cause interference.

Inside each area bounded by latitude and longitude, the OROCA is listed. The OROCA provides a 1,000 foot clearance from terrain and obstructions, or 2,000 feet in designated mountainous areas. The OROCA provides obstruction clearance only. It does NOT provide navigation or communication signal coverage. All IFR aircraft must operate at an altitude at least 1,000 feet (2,000 in designated mountainous areas) above the highest obstacle within a horizontal distance of 4 nm from the course to be flown, except for takeoff or landing. 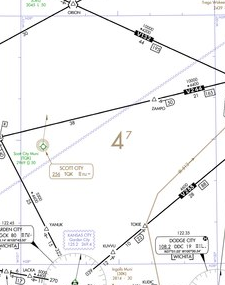 When the MEA, MOCA, or MAA changes on a route segment other than at a navaid, a sideways T is depicted on the chart. If there is an airway break without this symbol, you can assume these altitudes have not changed. 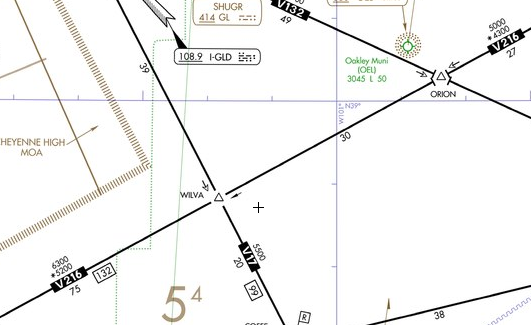 A pilot operating VMC on an IFR flight plan may request VFR-ON-TOP. If approved, select an appropriate VFR cruising altitude, which is at or above the minimum IFR altitude. When in VMC, it is the pilot's responsibility to see and avoid other traffic.