After takeoff from a towered airport, we will contact the air traffic control facility assigned in our clearance. The controller will then provide us instructions for transition to the en route phase of the flight. This is accomplished through assigning a heading to join your route or clearing you to a fix along your route.

For a few examples, say we were cleared from the Columbia Regional Airport to the Keokuk Municipal Airport via Hallsville, victor 63 Quincy, direct. Air traffic control could do a number of things to get us established on our route after departure. They could clear us direct Hallsville and tell us to resume our own navigation from there. They may give us a vector past Hallsville, such as a 020 heading to join victor 63. If we are GPS equipped, they would, in this case, more than likely just say cleared direct Keokuk Municipal Airport.

If your departure was from a non-towered airport, the initial clearance will contain the instructions for joining the route by which you have been cleared.

If you departed from or near an airport with a significant amount of air traffic, you may be assigned a departure procedure as part of your clearance. For example, on a flight from Kansas City International Airport to Jefferson City Memorial Airport, you may be cleared “via the Lakes Eight Departure, Columbia Transition, direct”. 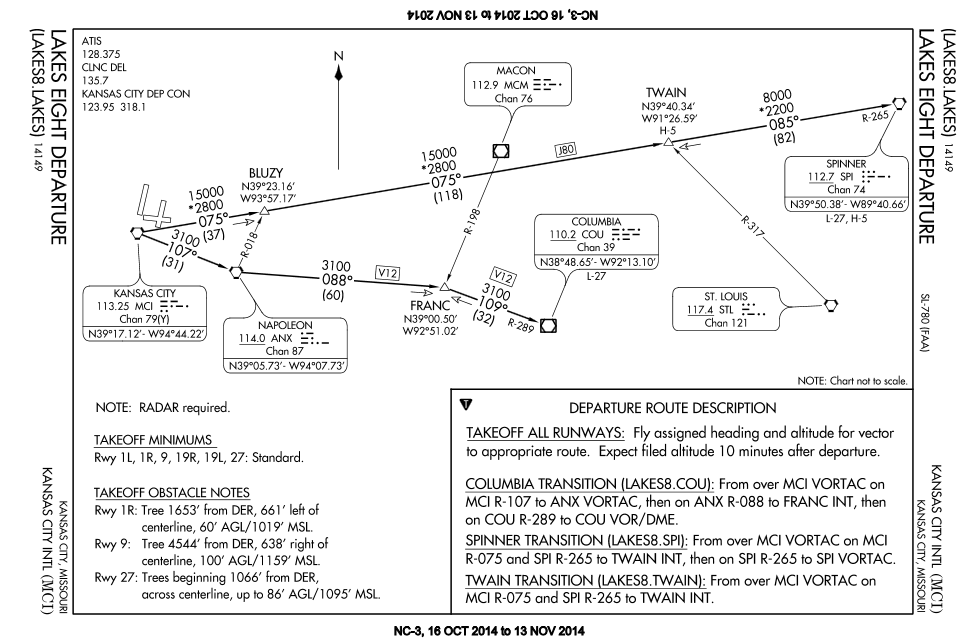 Take note of other important information contained on the departure procedure. The route description states that from any runway, you should fly your assigned heading and altitude for vectors to the appropriate route. This is another way of saying you will receive instructions to join your route after departure. It continues, stating you should expect your filed altitude 10 minutes after departure. A description of the graphically depicted route then follows. Although this particular departure procedure does not, many procedures list initial altitudes to be used. You should also take note of the departure frequency shown in the corner of the chart. In this case, it is 123.95.

Finally, look for any notes on the chart. This procedure states “RADAR required”. This means that air traffic control will not assign this route when they are not capable of providing you radar vectors to join your route. The purpose of this note is to make pilots aware. Should radar not be available and you be assigned this departure procedure, you should ask air traffic control what is going on. Maybe a mistake was made, or perhaps you are just not aware of their plan for you.

For example, clearance delivery may issue your clearance as, “Cessna seven zero eight golf lima, cleared to the Jefferson City Missouri Airport via the Lakes Eight Departure, Columbia transition, then as filed. Maintain 3000, expect 5000 one zero minutes after departure. Departure frequency is 123.95, squawk 4207.”

Pilots can elect not to use departure procedures. In this case, the pilot should advise ATC. This is normally accomplished by stating "No SIDS/STARS" in the comments section of your flight plan. If the pilot accepts a departure procedure, that pilot must possess at least a textual description of the procedure.